Celtic Cromptons
33 025 and 33 030 have finally moved to Aberdeen and are designated into a new sector pool from 19/12/99: WSAC – EWS Class 33 Aberdeen Shunting Pool.
Locos allocated to Motherwell and will return for major exams/repairs. Typical reports of the pair working in multiple:
6H54, 13.12 Aberdeen to Elgin and 6A11 19.15 return on both Fri 7th Jan and Monday 10th January.

33030 to the Rescue
As reported in the railway press, for the record 33030 was called upon to save the bacon of 66023 when it failed on the afternoon Aberdeen – Doncaster Enterprise, taking the whole lot as far as Millerhill. 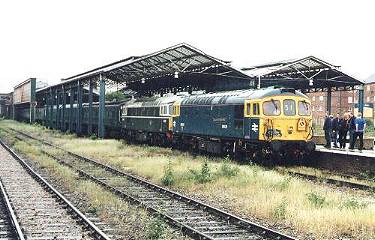 D6593 (33 208) has suffered collision damage to cab no.1 following a shunting accident at Ropley on the afternoon of 20th July 2000 when the locomotive struck a steam engine during operations at the Mid-Hants Railway. As per the photograph below, damage is restricted to buffers and slight damage to lower cab (photo I.Kennett).

33 030 has been working regularly at Aberdeen on local enterprise trips and shunting and with what possibly ranks as the working of the year (reported earlier on this page), the Scotrail Sleeper service, 21.40 Aberdeen – Euston from Aberdeen to Dundee on 10th October 2000 following the failure of 47 732 at Aberdeen. The 47 remained in the train to provide heat. Replaced at Dundee by 47 790, 33 030 returned light engine to Aberdeen.

33 025 and 33 030 are used as required in the Aberdeen area on shunting and trip workings depending on weekly traffic flows (see pic’s page). The regular enterprise trip workings they are often found on are as follows;

Note: Elgin is now served by a trip working from Inverness.

33 030 suffered an exhauster fire on 16/1/01 whilst working 6A11 Huntly – Aberdeen. (apparently the fuel racks were stuck over resulting in the engine operating at full revs!).
Loco planned to be moved today 17/1 to Motherwell for repair assessment (parts from 33 019) More details to follow!

33 025 has been out of service at Motherwell since the 24th November 2000 with engine problems – not expected OK until 21st January 2001 (from TOPS). A Class 37 has been outbased at Aberdeen to cover the Crompton duties!

33 034 was moved from Ludgershall to the Swanage Railway over the 8th/9th January. The loco’s restoration will be undertaken by the 71A locomotive group and is expected to take three years.

Items Added on 6th Feb. 2001
33 108 made its mainline passenger debut on Saturday 3rd February 2001 when it was allocated to work the 10.28 Crewe – Cardiff and 19.45 Cardiff – Crewe Wales & West additional services in conjunction with the 6 Nations Rugby. 33 108 outshopped in Fragonset black livery with a mid-bodyside red strip had worked from Derby to Crewe the previous day. The locomotive left Crewe on time but unfortunately failed at Hereford on the outward run and the train was terminated. 37 428 was despatched from Cardiff and hauled the Class 33 and stock to Cardiff Canton Depot. The 33 did not work the return trip.

33038 is expected to be cut up by week ending 25th March. Also in a derelict state, the Stratford-located loco has been systematically relieved of most, if not all of its serviceable items. Six class 31’s have already succumbed to the cutters at this location recently.

Information Received 4th June 2001
33207 out of Works
33 207 has been released from overhaul at Fragonset Works, Derby in full DRS Blue Livery (as carried by the DRS 37’s). The locomotive left Fragonset Derby for DRS at Kingmoor behind 20903 and 20906 late afternoon on Friday 25th May.

33207 has been reinstated to the XHSD pool on the same date.

33038 cut up
A resident at Stratford for the last 12 years, 33038 finally left by road on 22nd June. Transported to EMR Kingsbury, what was left of the heavily stripped loco was broken up on 27th June.

It is believed no other Class 33 had waited so long for disposal after withdrawal, having been set aside as long ago as 3rd October 1988! The loco suffered collision damage (runaway wagons) at Snowdon Colliery, Kent, when paired with 33050 ‘Isle of Grain’ on 5th Augiust 1988. 038 subsequently yielded parts to 050.

33108 on Mainline
Deputising for 50050 which was to have worked alone, Fragonset’s 33108 was on mainline railtour duty on Sat. 25th August 2001 when running with 04.30 1Z51 ‘The Devonian’ from Lancaster to Paignton. Originally, 108 was to pair up with 33021, however, 021 would not work in multiple, shuting down when connected. It was deemed a failure on Friday 23rd Aug. so 31602 stood in. Driver availablity problems were encountered en-route as Crompton driver knowledge appeared a bit thin on the ground. 31602 had to draw the whole train at times until a driver was picked up at Worcester. The picture sees the duo approaching Wellington, at speed, approximately 20 minutes late. Both were taking power at this point (photo – B.Thomas) 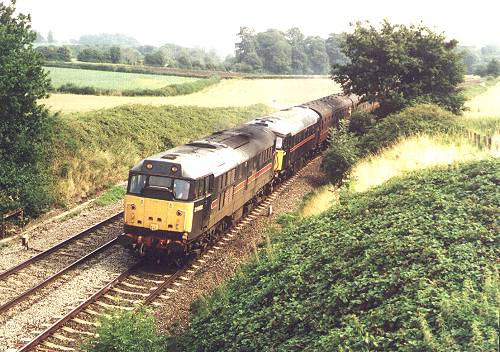 Information Received w/c 27th Aug. 2001
33116 for N.R.M.
33116 has been withdrawn from the tender list (advert 29) as detailed in the paragraph below and is, therefore, not for sale. The Railway Heritage Committee has designated the locomotive and following representations from the National Railway Museum, it is proposed the loco be donated to the National Collection.
Information Received w/c 5th Nov. 2001

33108 on Mainline
33108 has been hired by SWT as a snow ‘Thunderbird’ locomotive (just as they used 33 208 last year). Loco will be based at Woking and was due to operate the following driver refresher trains on Sunday 4th November 2001.

Confirmation has been received of the first timetabled Class 33 passenger train on the former NSE for nearly ten years!
33 108 pushed the 2A76 22.30 Alton – Waterloo from Woking (via Chertsey) to Waterloo returning the empties to Wimbledon Park, on the night of Sunday 4th November!

33 029 was moved by road on 24/10/01 from Carlisle Kingmoor to Fragonset Derby…possible overhaul?

A Day Rover ticket can be purchased for £10.

33048 is programmed to work on the weekend of 7th/8th Dec.
It is intended to use the loco on the following services over sections of the West Somerset Railway:-