All walls and pipes were covered in a carbon film accumulated over many years, which is stuck on and takes quite a bit of softening with ‘gunk’ or spirits to remove with a cloth. Several people have helped with this to the extent that apart from areas behind the brake valves and the roof mounted resistors etc., most walls and pipes are now a lot brighter and showing actual BR grey/green paint.

We have also had a good go at the rooflights and doubled the amount of light coming in. This, together with the more reflective areas on the surfaces from which the carbon has been removed, means the engine now looks a lot brighter inside in the day light. The rooflights over the exhaust are/were more difficult to clean as the extra heat here has ‘baked’ the soot on and browned the glass fibre, over the years.

Pipework is also begining to appear in its specific colours and the lube oil safety valve appeared out of the crud with its pipes in existing salmon pink instead of oil sludge black. 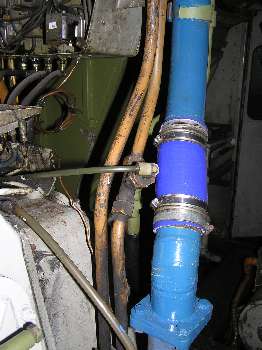 All water jacket flexible hoses have been replaced with brand new silicon blue hose (pictured left) with the exception of the inaccessible ones over the radiator elements and the jacket header tank to radiator top hose. To change this one we would need to remove the adjoining pipe which would disturb the thermostat wax element which is not ideal.

To test the power unit cooling, the radiator grills were blanked off and the loco run up at around 600 RPM to get her up to full working temperature see if the stat was working. The new thermometer gauge was just below indicated 165C when the fan slowly started to rotate rapidly, increasing to full speed by 170C – almost spot on by the figures in the book. We have also carried out a oil ‘leak off’ test on the hydro oil cooling pump at full revs. Reassuringly, only about half a litre of oil was measured over 1 minute at 750 RPM, indicating the pump is well within the wear tolerances given in the manual (another job not to have to do).

Other work has been to fix a couple of leaks on the pipework of the gauge board, and put the antifreeze in. The gauge boards covers have been taken ‘home’ to really clean down to the brass and finish off in gloss paint.

On the electrical front, it’s hopeful the negative earth fault on the locomotive has been located (one of the cab heater wires that was removed during the cab refurbishment is shorting to earth, somewhere yet to be located).

Planned work over Christmas and New Year is to carry on with the cleaning and painting, last job being a good steam clean around the bedplate.

33 065 (Sealion) : work on 65 has just been keeping her run up now and then and monitoring any new defects. She really smokes on cold start up which indicates suspect combustion/compression. It may be a case of having all the heads off when the overhaul is underway.

Although 65 is withdrawn it’s planned to keep running her up now and then to keep things working as far as possible.