Articles & Features CROMPTONS IN SOUTH & MID-WALES  FROM THE CAMERA OF R.W.RANSON PAGE 2 of 2

All photographs strictly © of R.W.Ranson 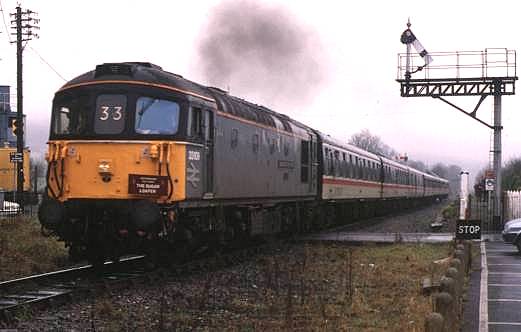 On 19th November 1994 33109 made a trip from Paddington to Llandrindod Wells called ‘The Sugar Loafer’. The weather was pretty bad as can be seen from the conditions at Pantyffynon (above) although 109 still made for a stirring sight. At Llandridod itself (below), 109 arrives while the repositioned signal box is on the left. Moved from the level crossing at the end of the station after the line was resignalled, the box now only serves as a reminder of the building quality and style once enjoyed by the Central Wales line in more prosperous years. 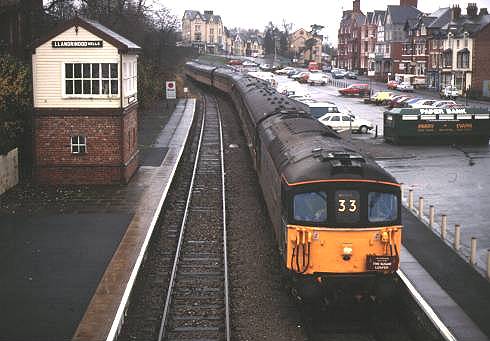 21st October 1995 and 33116 (blue) and 33109 are in S.Wales on a tour from Paddington. In the photo above, the pair are approaching Tower colliery located at the end of the branch beyond Aberdare and Hirwaun. Tower is the last remaining deep mine in S.Wales and is a highly successful workers co-operative of international renown.

Top’n tailed with a ’56’, the train is seen leaving Pontypridd (below) with the Cromptons trailing on the decent to Cardiff. ‘109’ is now owned by the 71A Locomotive Group. 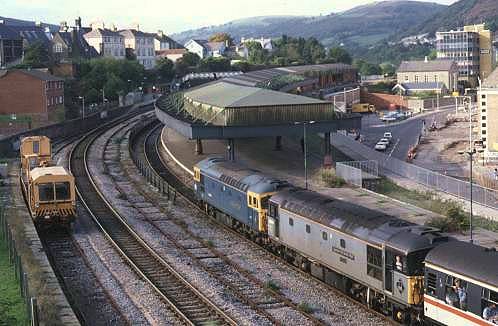 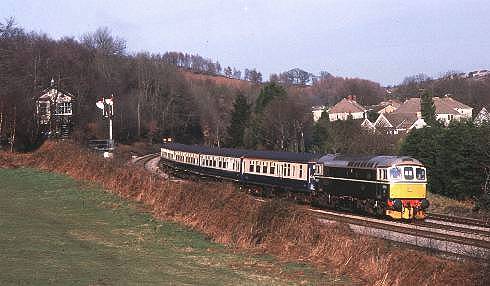 33208, also known as D6593, heading South in the Rhymney Valley on a Cardiff – Rhymney – Cardiff crew training run. It has just passed the splendidly eccentric (S&T term?) Ystrad Mynach signal box where its position on top of the embankment requires an additional frame infront of it to allow roding and wires to turn a right angle to get to track level. The bracket signal controls the junction for Cwmbargoed (left) and Rhymney. 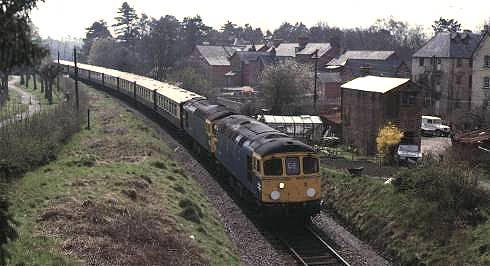 Coming out of the sun on 19th April 1985, 33034 leads 33005 approaching Llandrindod Wells with the VSOE stock having started out from Ealing Broadway. The addition of a temporary headlight was always required on locos and dmu’s when operating on the Central Wales Line until ‘modernisation’ saw them fitted as standard.

33005 suffered a flashover and fire damage at Brighton prior to working the 08.30 Brighton – Cardiff on 19/6/87 and subsequently withdrawn six days later. Stored at Eastleigh Depot and then Salisbury Carriage sidings, it was eventually scrapped at Vic Berry’s, Leicester, on 24/9/90. ‘034’ survives in preservation.