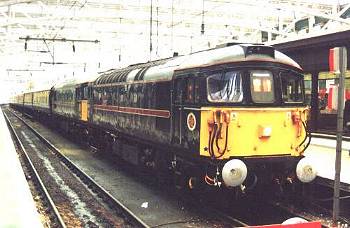 Friday 17th May 2002 can only be described as the most eagerly anticipated date in the Crompton followers diary in 2002. This date heralded the third tour organised by 33 111 Charters (Class 33/1 Preservation Company Limited) and with destinations of Largs, Stranraer and Glasgow Central and 2 x 33 on the agenda, it was certainly their most ambitious!! Profits from bookings and sale of refreshments on the train would all be put towards the continuing restoration of 33 111 at Barrow Hill.

The plan was to utilise the other Class 33/1 Preservation Company’s locomotive, 33 108, operating under Fragonset in multiple with a further mainline certified Class 33. Given that the majority of mainline certified Cromptons are currently out of service, it was a race against time for Fragonset to complete electrical and generator repairs on 33 021 to enable a pair to be available! 33 021 had been out of traffic for over a year and with repairs/exam only completed at Derby at lunchtime on the 17th, the tour was effectively going to be an 800+ mile test run!!

It was therefore with a mixture of excited anticipation and anxiety that everyone gathered at Crewe on the Friday evening. The good news was 33 108/021 had successfully run light from Derby to Crewe and following refuelling at Crewe were shunting the 12 coach train at the South Carriage Sidings.

Externally the Cromptons looked superb. One of the benefits of the recent attention at Fragonset for 33 021 was the long awaited repainting from the ‘red’ livery to Fragonset black whilst retaining ‘Eastleigh’ nameplates. 33108 had also received white buffers and a set of ‘Vampire’ nameplates (pictured) complete with crests detailing an aeroplane. One only hoped the internal condition matched the resplendent external condition! Early reports were that 33 021 was certainly going to be needed to be treated gently if it was to get through the next 30 hours without fault.

Additional shunting to ensure 33 108 was the leading engine from Birmingham onwards resulted in a 30 minute delayed departure south from Crewe at 19.00hrs…South?….yes, the tour which had Scotland as its destination would run from Crewe to Birmingham International before the Cromptons ran round to begin their journey northbound giving Crompton followers a further 120 miles of Crompton action. The run down the West Coast mainline was certainly spirited and most fears of a failure began to subside. A further 30 minute delay followed on the Rugeley – Bescot section at Hednesford whilst we awaited a pathway behind a local stopping service resulting in an hour late arrival at International. Rail Standard time had been achieved in the first two hours of the 28 hour tour! The good news was the Cromptons were performing well and sounding excellent and all on board were now eagerly awaiting the long journey north overnight via the Settle and Carlisle and on into Scotland via the GSWR. To help proceedings along the Class 33/1 Preservation Company had arranged for 25 different beers to be available during the tour….all in all a mouth watering prospect indeed!!

Whilst people may have questioned why transverse the picturesque S&C overnight, it certainly proved a unique and atmospheric experience crossing such landmarks as Ribblehead Viaduct in the small hours of the morning! The tour had been allocated an hour at Carlisle for watering purposes and we hoped that this could be significantly reduced to make up time as the pathways on both the Largs and Stranraer branches were limited and missing our allotted slot could prevent further access. At Carlisle the opportunity was taken to place the ‘Saltley Seagulls’ headboard on 33 108 and whilst we made up some of the deficit, we left Carlisle late. It was now almost 0400hrs and most of the tour participants were now seeking some much needed sleep and would have been oblivious to the negotiations that were taking place to persuade Railtrack to allow the train to continue as advertised to both Largs and Stranraer. They proved successful as on arrival at Falkland Yard, Ayr, the assisting Class 56, 56 106 was attached to the rear and the Cromptons were given the road north..to Largs. Most people thus woke to the sight and sound of 2 Class 33’s at Largs…were they still dreaming?? Well if you didn’t wake at that vital moment, you’d have missed it as no sooner as we arrived, the Cromptons were shut down and 56 106 began to power the train back to Ayr and on to Stranraer. 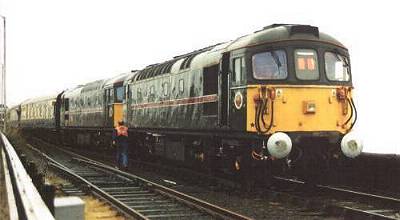 Fortunately, some further time had been reclaimed and Stranraer was not in any doubt. The sunny evening departure from Crewe had now turned into some very characteristic Scottish summer weather and our arrival at Stranraer was met with freezing wet and windy conditions! There were photographs ‘for the record’ (pictured right) whilst the Class 33’s were restarted (who had been brave enough to shut them down in the first place?) and after a brief 15 minute stay, Stranraer was bidding farewell to its first Class 33’s . The run back to Ayr and onto Glasgow (detaching 56 106 at Ayr) was a particular highlight with the long climbing gradients and the two Class 33’s wide open for a significant proportion of the journey!! Any doubts as to their fitness and capability had now totally disappeared! The sight of two black Class 33’s winding their way through the Glasgow suburbs had to be seen to be believed and in fitting to their superb performance, we arrived earlyat the buffer stops at Glasgow Central (below) shortly after mid day which certainly caused interest with all the shoppers!

There followed a 2 1/2 hour break in Glasgow whilst the tour stock was turned using the Shields Road – Polmadie chord with 90 016. The rain was unrelenting as 90 016 drew the stock back into Glasgow Central for a 14.45 departure south (pictured below). The route south was directly down the West Coast mainline and as the Class 33’s powered over Beattock, the weather began to brighten. Arrival at Carlisle saw our tour take part in what can only be described as a remarkable 15 minutes at the station. On arrival, two GWR ‘Hall’ Class steam locomotives were on the adjacent platform with another tour to Birmingham. Following their departure, they were replaced immediately by none other than D9000 and a tour for Cleethorpes! Who said all the variety had disappeared on Britain’s railways? A further spirited run was had over Shap and Tebay before we were looped at Carnforth, now in sunshine, to allow a Virgin express to pass. 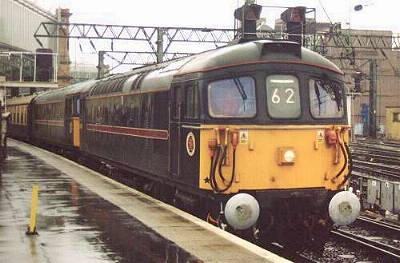 Also looped at Carnforth was the Steam tour, and as you can imagine some healthy banter between the two trains followed whilst we waited for the express to pass. With delighted roars from the trains the Cromptons were given the road ahead of the steam and we proceeded to make excellent progress towards Crewe as the evening sunshine shone down upon us. Anyone who had put their head out of the window during the spirited southern run (speeds of 90+ had been recorded) may have noticed an increasing smell of diesel coming from the 33’s. Arrival at Crewe identified that 33 021 had suffered a cracked fuel injector pipe and was leaking fuel. As both Class 33’s were relatively low on fuel having not refuelled since leaving Crewe the night before, it was decided to shut down 33 021 on departure from Crewe whilst an attempt was made to rectify the fault. Therefore the amazing spectacle of 33 108 with load 12 and 77 tonnes of dead Class 33 in tow, departed Crewe for Stafford. With the Crompton wide open, progress was noticeably slow but over the next 10 miles the 33 had built up speeds of 60mph. 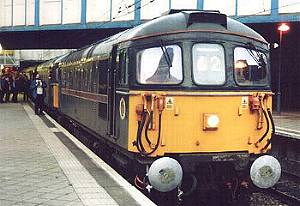 Arrival at Stafford saw the fault on 33 021 isolated as the locomotive was restarted, essentially now as a 7LDA locomotive! Normal service was therefore resumed for the run to Birmingham New Street via Bescot. At New Street (left) we were scheduled to run round and retrace our steps, however, as photographs were being taken we were all ushered back onto the train as the Cromptons were given the road north. On departure from New Street we turned right at Soho to pass Bescot and its numerous engineers trains being prepared for overnight possessions and then onto the final leg of the journey back via Stafford to Crewe for an early arrival!

As the Cromptons uncoupled and ran round the stock it was clear that the tour and the Cromptons had certainly lived up to the high expectations and the Class 33’s had performed superbly over 800+ arduous miles with 33 021 more than successfully passing its ‘test run’! Many thanks to 33 111 Charters and Pathfinder Tours for a truly exceptional tour! Now that we have 2 mainline Class 33’s back in action, here’s to the next one!