33065 Strenuous efforts concentrated on the continued restoration of 33 065 such that 065 was unveiled in full BR Blue livery (with a full white roof and red buffer beams), rounded off with the rededication of its red ‘Sealion’ plates, at the EKR Gala over the Bank Holiday weekend at the end of August. We hope to bring a feature to these pages in due course to record the occasion.

The Class 33 batteries, purchased to replace the temporary batteries, were fitted prior to the May Gala Weekend. However, problems were identified with several dead cells within the batteries and required them to be sent back to the supplier. These were scheduled for return from repair and fitting on 16th July.

Importantly, the locomotive’s air tanks were passed and certified on 15th May. Work on the cab floors has progressed during the Summer. The external restoration which has been continuously frustrated due to the infamous British weather is now, to all intents and purposes, complete, thanks to the tireless efforts of a few dedicated members and supporters. With only a matter of weeks before the Gala in August, the loco was still in need of a second coat of Blue and one yellow cab end.

33063 The loco has continued to perform faultlessly throughout the Spring and Summer at the Railway. Following the Crompton Gala (5/6 May 2002), the locomotive performed at the Fire Engine event on 18th/19th May and Driving Experience days. Due to 427 now being out of traffic (Aug.02 onward), 33 063 has been working every weekend covering 427’s duties. The locomotive also operated at the East Kent Railway Gala weekend over the Bank Holiday weekend in August (Sunday 25th/Monday 26th August) and at the Bus Rally event on Sunday 15th September where it operated an hourly shuttle from 11.00hrs – 15.00hrs with the EPB.

Over the May Bank Holiday Weekend Crompton followers had the unenviable choice of 4 Class 33’s to sample……the only drawback being that one was in Scotland, one in the East Midlands and the other two in Dover! Such is the delights of preservation in the 21st Century! Whilst 33 019 was making its preservation debut at the Bo’ness and Kinneil Diesel Gala and 33 108 was out operating another Green Express tour, the South East Locomotive Group were staging their second two day Crompton Gala at the East Kent Railway. 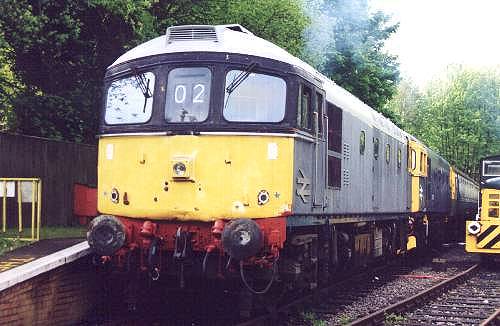 Preparing to depart Shepherdwell with the first train of the Bank Holiday (6th May),

Following a similar format to the successful original Gala in September 2001, the two day event detailed an intensive passenger service from Shepherdswell to Eythorne and also the opportunity to drive a Class 33 from Eythorne to Wigmore Lane buffer stops. As previously the first departure from Shepherdswell and final departure from Eythorne would be operated by 2 x 33/0 in multiple to position the ‘drive a loco’ engine for the day. 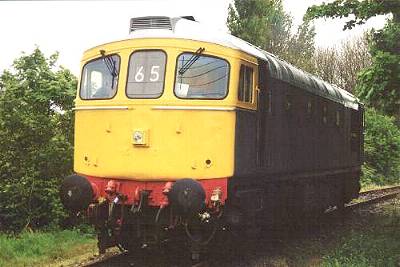 33 063 was booked to operate the passenger trains on both days with 33 065 taking the ‘drive a loco’ at Eythorne Whilst 33 063 still looked resplendent in BR Blue, the plan to repaint 33 065 in full ‘named’ BR Blue livery with white roof and red buffer beams and to attach the recently purchased red ‘Sealion’ nameplates had been frustrated by the typically poor British spring. However work had progressed and 065 was now in full grey undercoat, had one cab end fully repainted and also sported a fresh white roof for the occasion. Left, 065 sits at Eythorne crossing on drive-a-loco duty. Note the white roof and the difference a coat of yellow paint makes to No.2 end compared with that of No.1, above. 33 065 had recently received its first set of Class 33 batteries after surviving in 2001 with a set from a Class 73!

33 065 and 33 063 were paired in multiple for the first train of the Gala, the 10.00 Shepherdswell – Eythorne with the EPB/MLV in tow, and a fine sight and sound they made on departure complete as ever with the ‘SELG on Tour’ headboard. 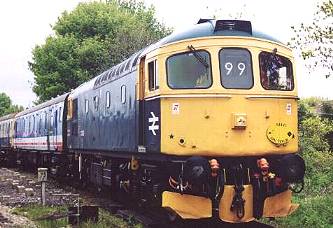 On arrival at Eythorne, 33 065 was duly detached to commence ‘drive a loco’ duties and sitting between duties at the level crossing at Eythorne, frequently gave passing motorists a panic attack as they crossed the railway line! The 11.00 departure from Shepherdswell saw 33 063 shutdown twice with the recurring electrical fault. Thankfully the locomotive successfully restarted on both occasions and went on to perform faultlessly throughout the weekend. Pictured right, 33063 waits to depart from Eythorne with the 15.20 to Shepherdswell. The MLV is tucked in behind.

Prior to departure of the 13.00 to Eythorne, 33 063 ran round the stock in position on the Shepherdswell end of the train and pushed the 13.00 departure to Eythorne in readiness for 33 065, taking a break from ‘drive a loco’ duties to back onto the other end to top and tail the 13.30 return to Shepherdswell and 14.00 back to Eythorne. This gave it the opportunity to cover this quiet corner of Kent with a large amount of what can only be described as ‘Crompton Clag’! On arrival at Eythorne, 33 065 again uncoupled from the train to resume ‘drive a loco’ duties before leading 33 063 for the day’s multiple finale, the 16.45 Eythorne – Shepherdswell. The sound and clag through Golgotha tunnel had to be seen and heard to be believed! Monday saw a repeat performance with both locomotives performing without fault

The Sunday 16.45 Eythorne – Shepherdswell, worked in multiple by both Cromptons, made for a fine sound and experience through Golgotha Tunnel. 33065 is pictured leading 33063 ready to leave Eythorne and then again at Shepherdswell having disgorged the passengers. Preparations are inhand to shunt the stock for the following day’s operations.

The Complete Workings (33063 only, unless stated)

So whilst a missing bridge prevents the line reaching Tilmanstone Colliery and thus is somewhat short in length, it has an impressive tunnel with a reasonable gradient and presents a unique opportunity to sample 2 x 33 on the true Southern Region, complete with EPB and MLV for added nostalgia, and over a line associated with the Class until its closure in the 1980’s.